We weep, we work, we rise

So then, whenever we have an opportunity, let us work for the good of all, and especially for those of the family of faith. -Galatians 6:10 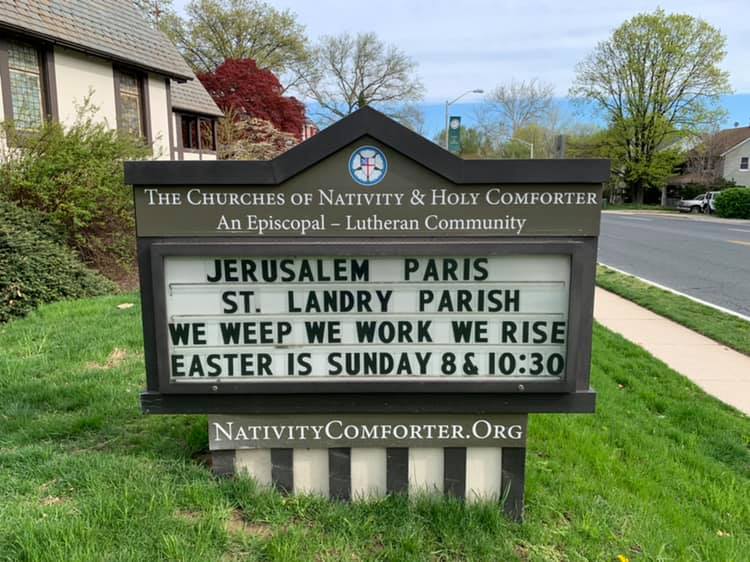 This photo and the title of this blog post come from The Church of the Nativity and Holy Comforter in Baltimore, Maryland.

Like many of you, I was horrified by the experience of watching the fire that consumed the roof and spire of the Cathedral of Notre Dame in France. So fast and swift was the news carried across social media, I became overwhelmed by the same devastating images again and again.

The armchair quarter-backing was just as fast, some suggesting that this catastrophe was a metaphor for the collapse of Christianity in Western culture. As one who visited Notre Dame on more than one occasion, I found that an unhelpful conclusion to have drawn, as that parish community is vital, diverse and engaged. Daniel Collins, one of our seminarians at the Lutheran School of Theology at Chicago, said it well: “Notre Dame Cathedral parish was one of the most diverse that I have ever attended, hearing confessions in several world languages, their priests from diverse and multiethnic backgrounds, with active advocacy and ministry for immigrants and the poor. As a symbol for the French in general, who are now by and large a multiethnic people, Notre Dame had long ceased to be a symbol of White French Catholic supremacy (as it was during the Reformation) into a model for multicultural, ecumenical, and interfaith engagement.”

The day after, we know that Notre Dame will be rebuilt and that, already, $350M has been committed to the reconstruction. With the irrepressible song of the French faithful still ringing out in Paris, Good Friday gives way to Easter, again.

Still, while the world’s eye is turned toward Paris, I join those who remind us that, while not iconic as Notre Dame, three historically black churches have burned in less than two weeks in St. Landry Parish, Louisiana, where officials have charged the son of a sheriff with hate crimes in the intentional settings of these fires (if you would like to help support these churches as they rebuild, you can do so through this GoFundMe campaign). In each of these cases, while not nearly as expansive of a global ministry, each of these congregations are a vital part of the fabric of the communities they serve, and each one a devastation for its parishioners, neighbors, and friends. The FBI reports that racially-based crimes are up for the third year in a row, and my sense is that while these kinds of crimes against communities of color was newsworthy a few years ago, we are becoming increasingly numb to these realities, and are accepting such overtly racist activity as part of the normative fabric of our American experience.

And, even while Notre Dame was burning, Al-Aqsa Mosque, a faith community closely linked to the ongoing Arab-Israeli conflict in Jerusalem, was on fire, too. While there was no evidence of any link between the two fires, Al-Aqsa is the third holiest site in Islam and its desecration is a devastating blow to the world Muslim community.

I don’t wish to rob us of our collective mourning around the fire at Notre Dame, but to be reminded that every time a church, synagogue or mosque burns – accidentally, or, compounding the trauma, intentionally – it is just as devastating to the community it serves and it is a loss to the whole of this world that God so loves.

So let us not grow weary in doing what is right, for we will reap at harvest time, if we do not give up. So then, whenever we have an opportunity, let us work for the good of all, and especially for those of the family of faith. –Galatians 6:9-10