If we claim, “We don’t have any sin,” we deceive ourselves and the truth is not in us. But if we confess our sins, God is faithful and just to forgive us our sins and cleanse us from everything we’ve done wrong. –1 John 1:8-9

I find myself in a strange position. 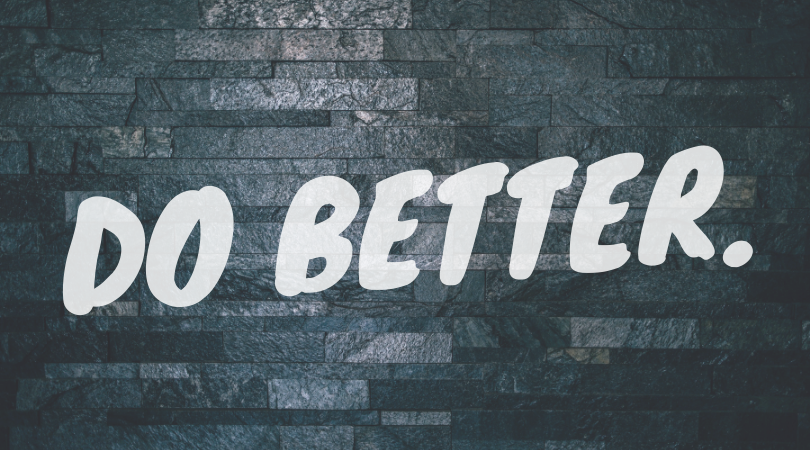 After behaving poorly as a leader, colleague, and friend – publicly, no less – at least three times over; I did what I was taught to do by my parents, mentors, and what my spouse and I have attempted to teach our children: I took responsibility.

Because my gaffes were made in public, and publicly diminished my colleagues and friends, I sought their consent to apologize publicly. It gave me the opportunity to “right my wrong,” correct myself “on the record,” and the space to reflect on and accept responsibility for my own misogyny. The intent behind that blog post was to take responsibility, apologize, and then publicly point folks to the pastors and ministries I failed to lift up when I had the opportunity to do so earlier. The ensuing conversations astonished me.

Women in ministry publicly shared stories of institutional misogyny, experienced sexism and daily microaggressions that caused me to weep. These stories, they assured me, had been told and diminished by others more than once, many times dismissed as their being “too sensitive,” or “unable to take a joke.” These colleagues were not complaining or asking for any particular response; they were simply reporting a common and all-but-universally shared experience for women who exercise public ministry in this church. I’ve been fairly disgusted with myself for not recognizing this hidden-in-plain-sight experience of these colleagues, which includes my own spouse. (Simultaneously, I heard from exactly six male colleagues, all but one off-line, all of whom admitted to having committed the same systemic sin of which I am guilty. Six. I was surprised by that, too.)

Still, with a collegial largesse greater than my own, these women colleagues were quick to offer forgiveness, accompaniment, and here’s the sticky wicket, accolades for my “honesty and vulnerability” in apologizing.

It’s humiliating; being affirmed for apologizing, when I was obviously and admittedly in the wrong, it feels as if my apology was at the repeated expense of those to whom I was apologizing in the first place!

A Facebook comment from on a friend’s post sharing the blog summed-up my intent: “This is so helpful to hear from a person in power for many reasons, and yet my main takeaway was to be inspired by the awesome ministry these three pastors are leading!“ (Pastor Courtney Erzkus, emphasis mine)

And then, just when I thought we had moved on, and I had learned something more of my women in ministry colleagues’ experience; unbeknownst to me, the editors of The Christian Century lifted me a little further out of my middle-judicatory anonymity and weighed in on my blog by reporting it to the larger mainline-Christian community which snowballed a bit into a new referendum on how “brave and vulnerable” a misogynist I am. I would have liked to crawl under a pew and hide!

Pastor Lura Groen, with whom I belong to a weekly pericope Bible study group and who I know to be a (hard) truth-teller, gave voice to my discomfort in another Facebook comment: “I know our Bishop thinks he deserves no praise for this apology, and that it ought to be routine. And he’s right, on one level. But it isn’t routine. And so we need to lift it up as a model. Also, it is so far from routine that men acknowledge the harm caused by these sorts of comments. So unusual, and so needed. That again, we need to hold it up as an example…” And, despite the humiliating discomfort it causes me for this moment, I know that she’s right.

Some of the deepest pastoral relationships were forged in relationships where I made mistakes, took responsibility for them, and apologized. I cannot count the number of times someone has told me they’ve “never heard a priest/pastor/minister/bishop apologize before.” “How sad,” I always think, knowing how many times I get it wrong.

To my female colleagues: I see you. I hear you. I’ve been honored by your testimony, witness, vulnerability and trust. I receive your offer of accompaniment as a graceful gift; hold me accountable to my commitment to do better.

To my male colleagues: we can do better, and we are rightly expected to.

One might say I’m the “sorriest” bishop in this Church; but what I’m aiming for is to be one who screwed up big and, usefully chastened, changed his ways.

We announce to you what existed from the beginning, what we have heard, what we have seen with our eyes, what we have seen and our hands handled, about the word of life. The life was revealed, and we have seen, and we testify and announce to you the eternal life that was with the Father and was revealed to us. What we have seen and heard, we also announce it to you so that you can have fellowship with us. Our fellowship is with the Father and with his Son, Jesus Christ. We are writing these things so that our joy can be complete. The message: God is light. This is the message that we have heard from him and announce to you: “God is light and there is no darkness in him at all.”  If we claim, “We have fellowship with him,” and live in the darkness, we are lying and do not act truthfully. But if we live in the light in the same way as he is in the light, we have fellowship with each other, and the blood of Jesus, his Son, cleanses us from every sin. If we claim, “We don’t have any sin,” we deceive ourselves and the truth is not in us. But if we confess our sins, God is faithful and just to forgive us our sins and cleanse us from everything we’ve done wrong. If we claim, “We have never sinned,” we make of God a liar and the Word is not in us. –1 John 1:1-10